On Pixels.Camp V3, following last edition’s example, there was a challenge hidden the event t-shirt.

Getting all the tshirts

This was probably the easiest step of the whole process, albeit a bit time consuming (not the most time consuming, as you’ll soon find out). During the goodie bag and shirt giveaway we looked into the pile to find out how many there were and all chose differently. Between us and our group of friends (shoutout to afonsus1997 and mjamado) we managed to get 6 different shirts. Given that we noticed that they would work in pairs, we kindly asked the staff if we could check the entrance lobby, where the shirts were stored, if we could find the ones that were missing.

By the start of the Code in the Dark event we had all 10 shirts. 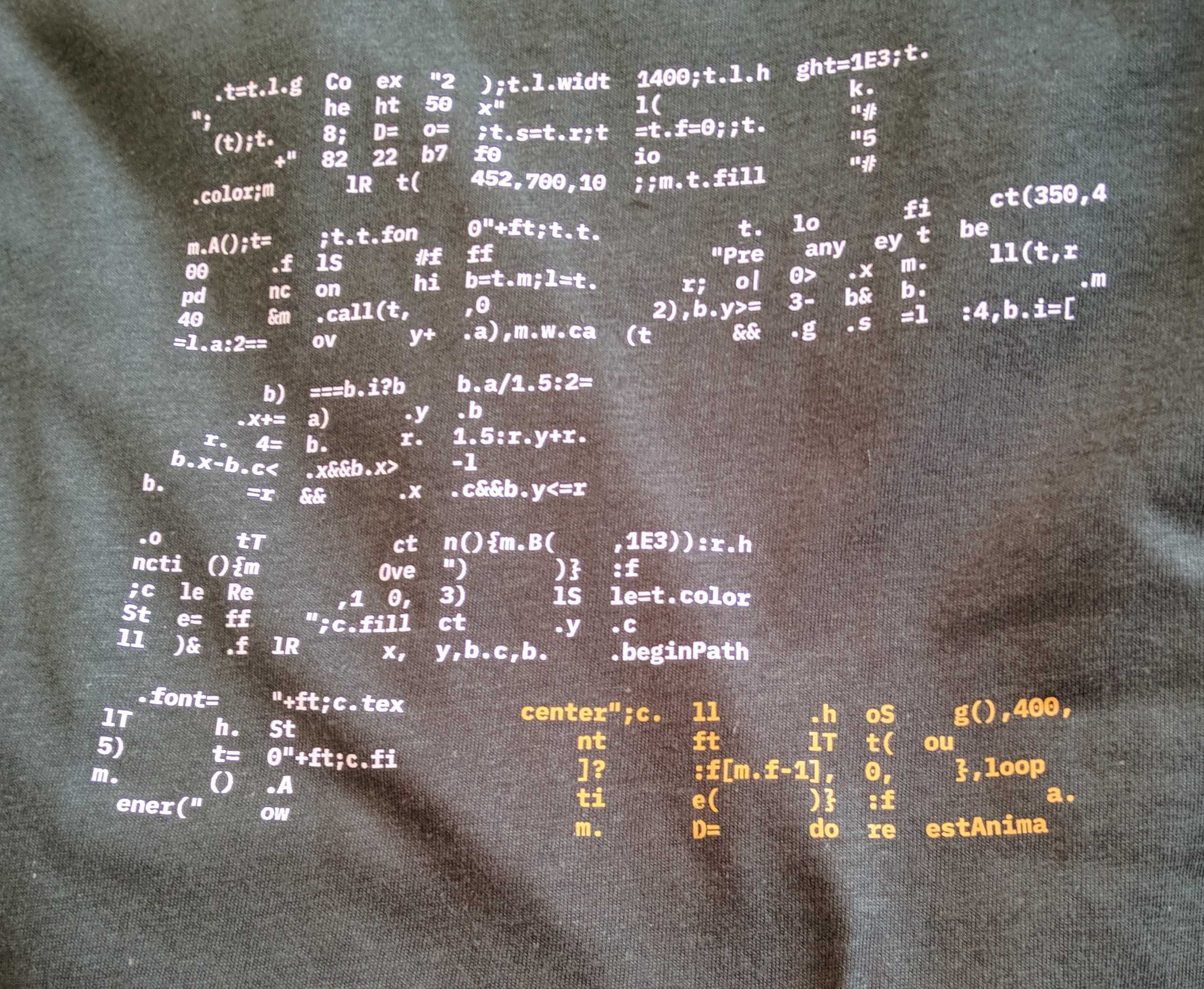 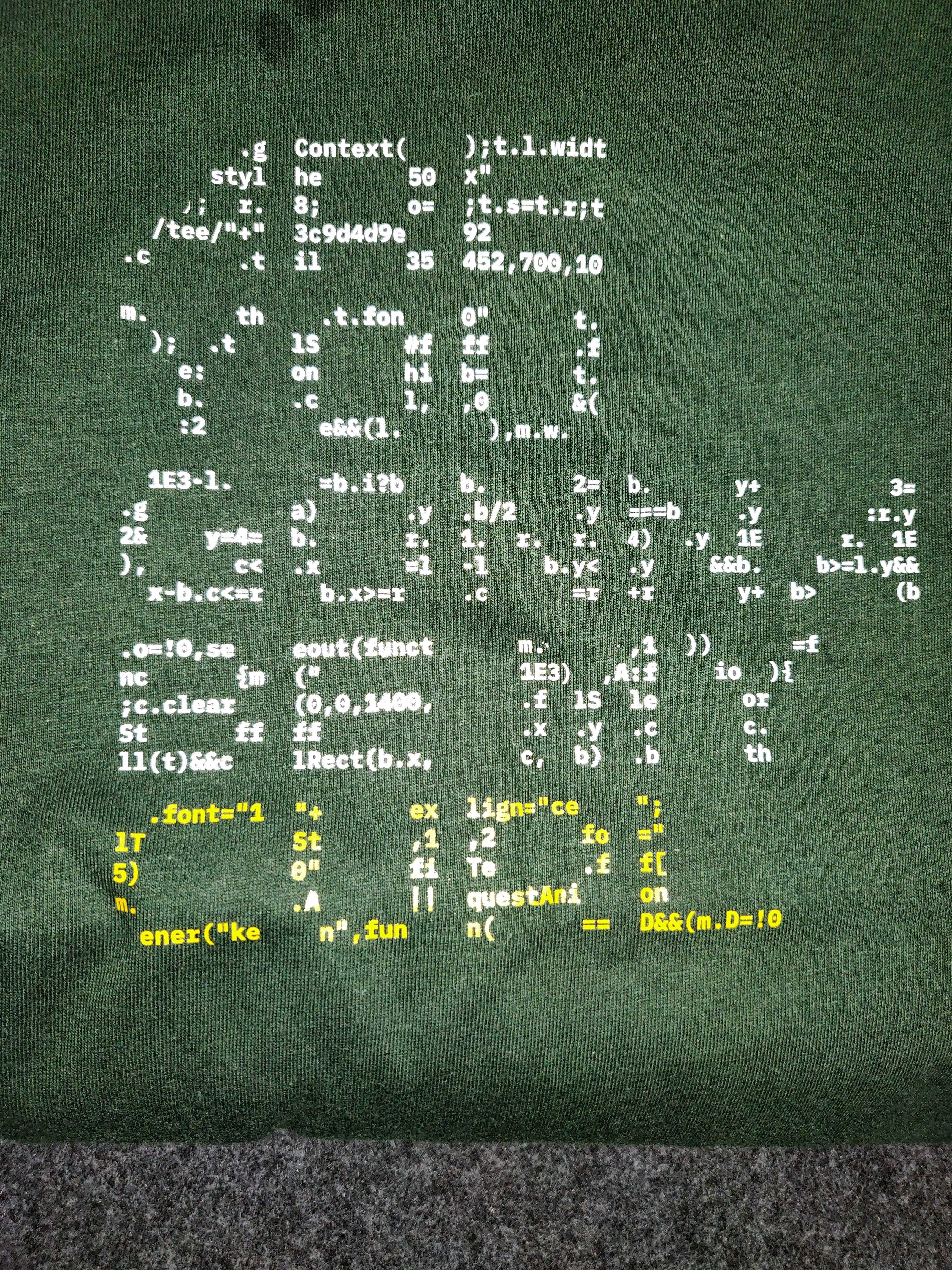 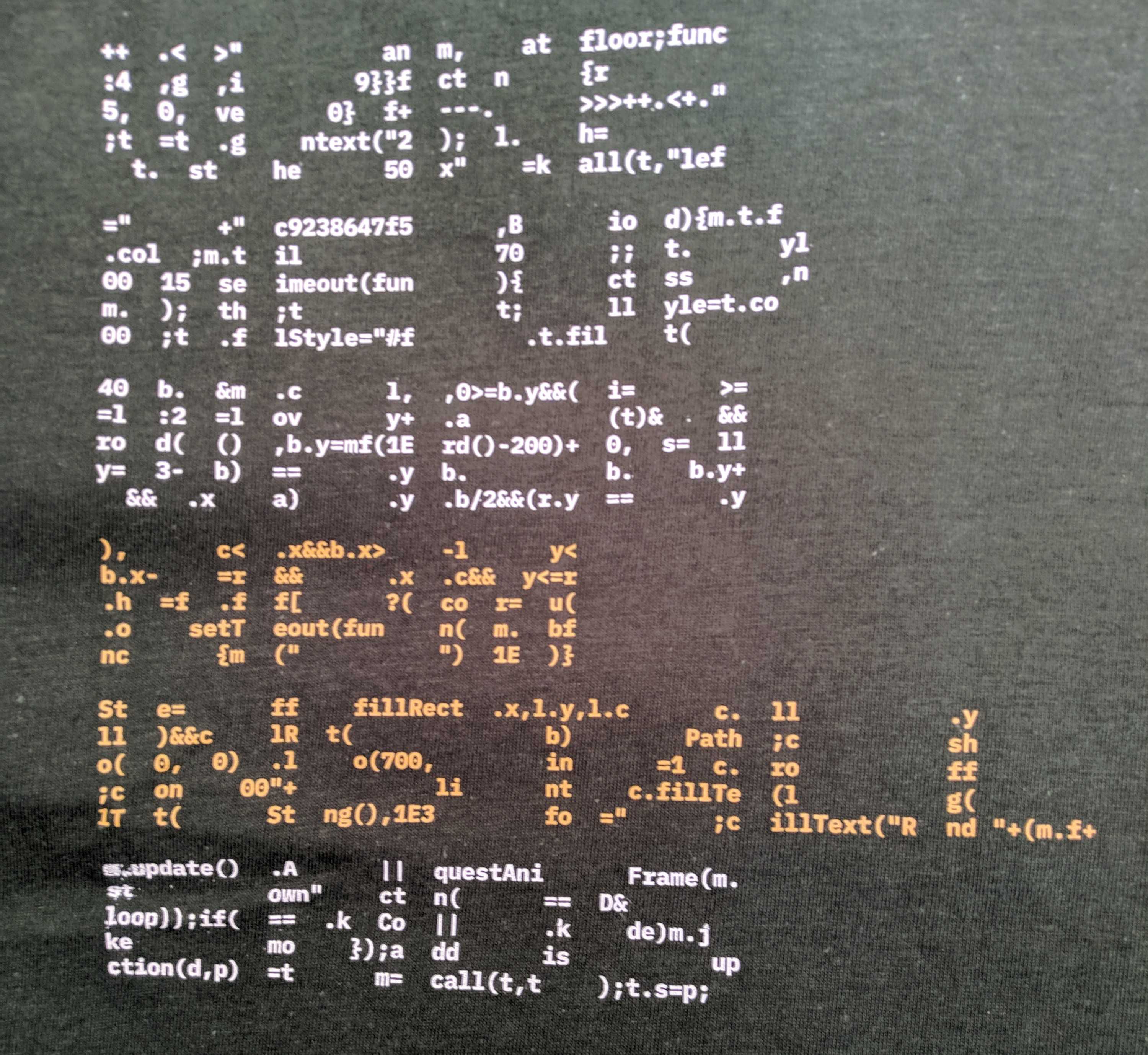 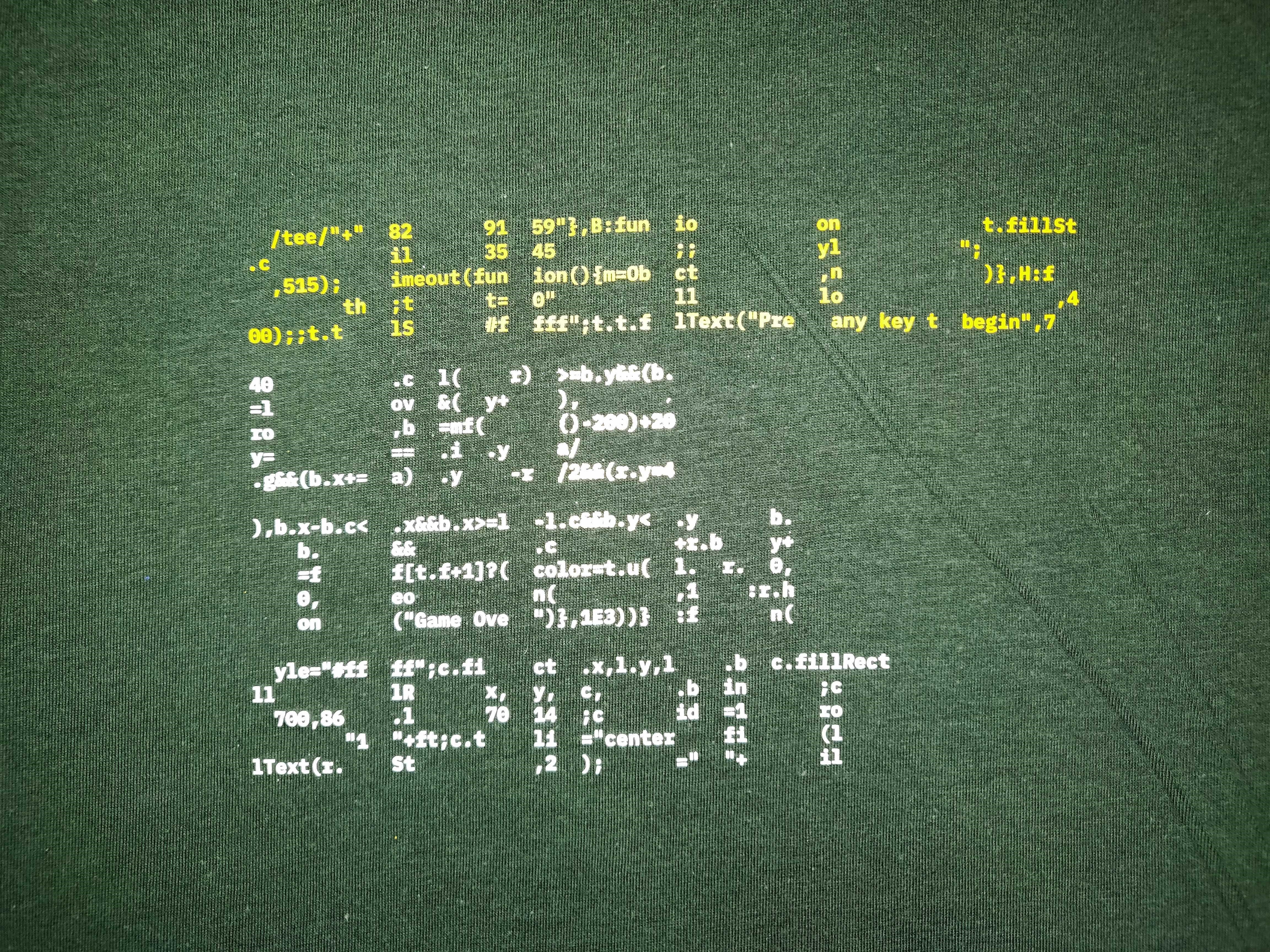 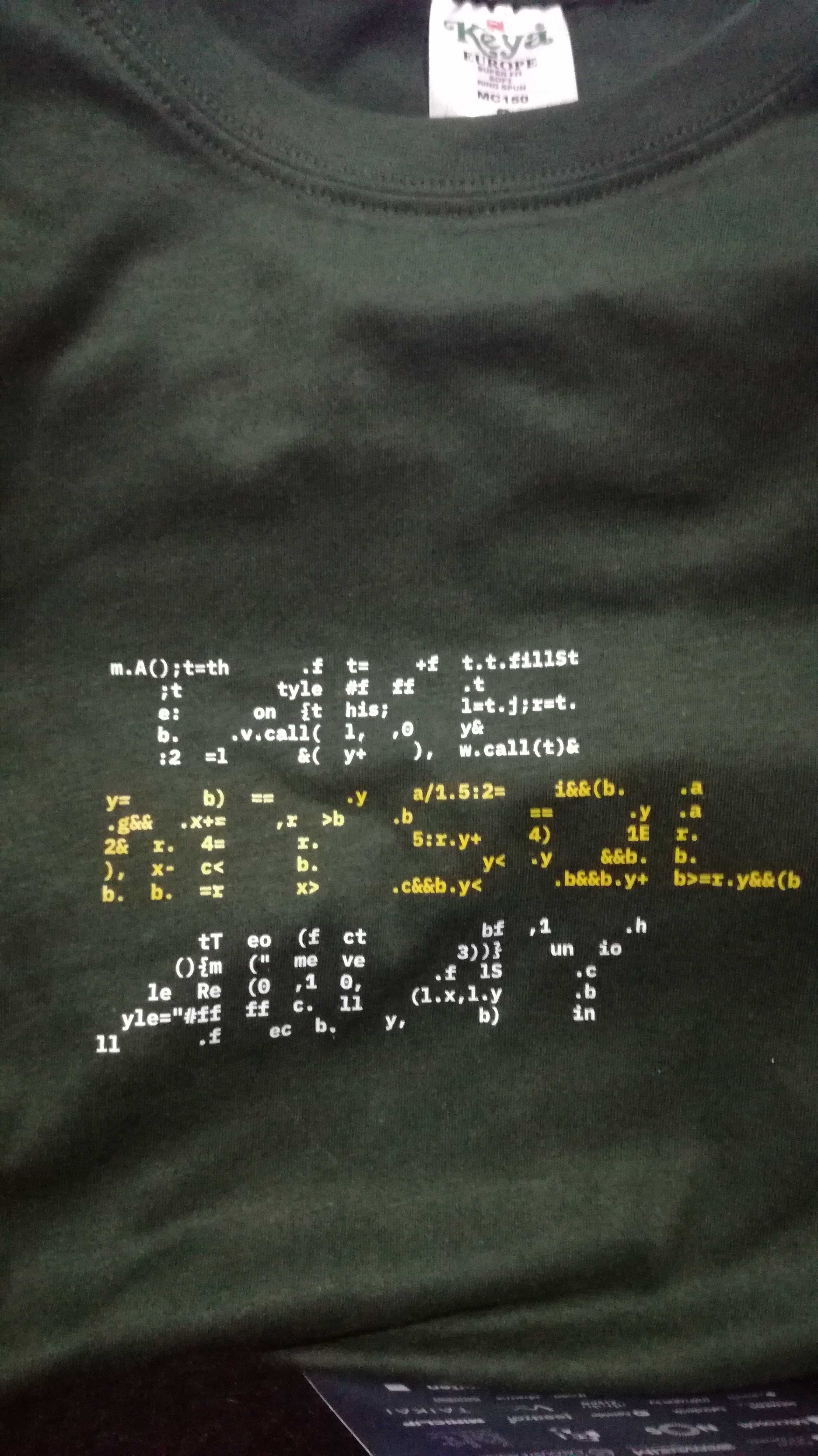 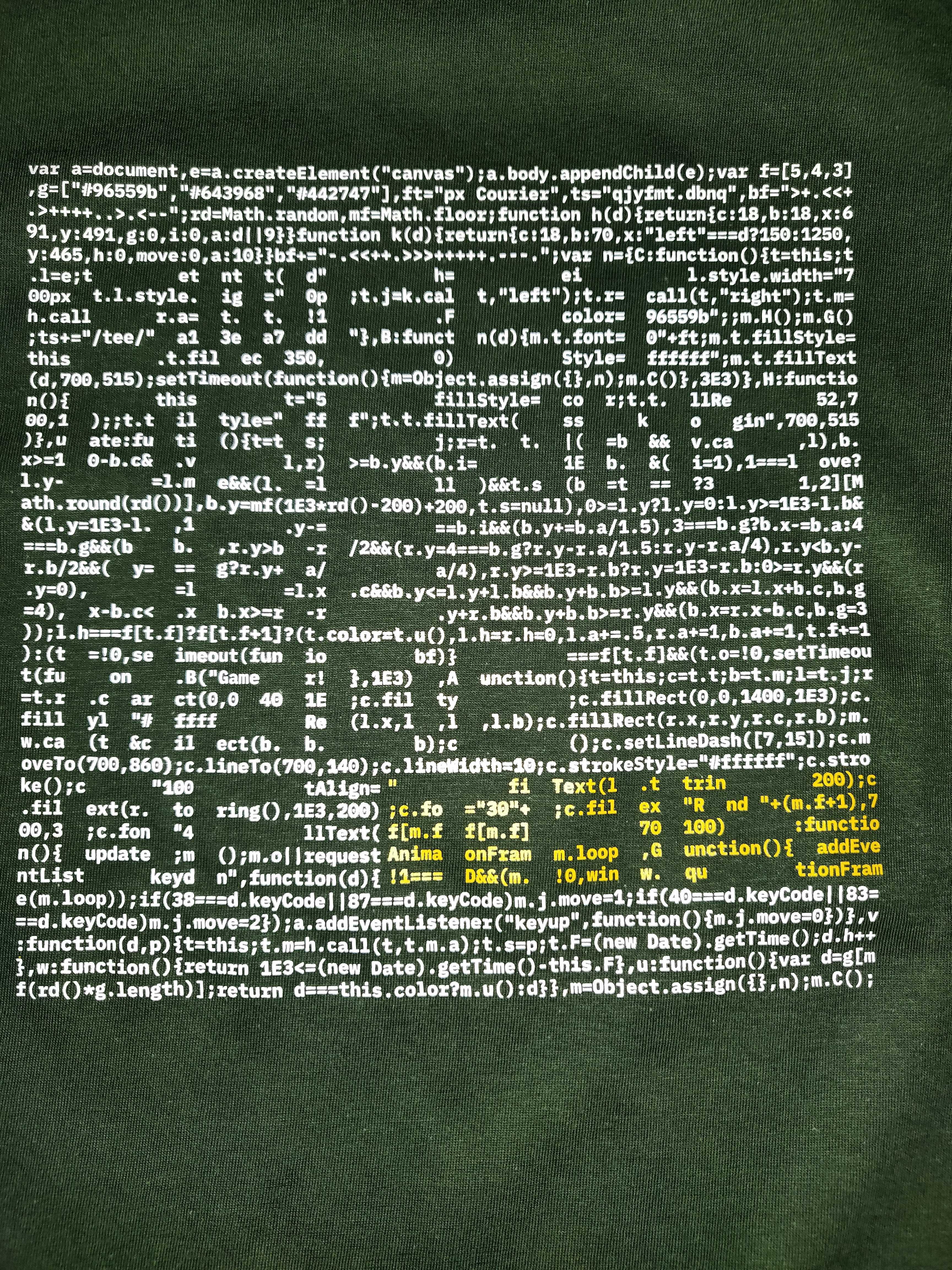 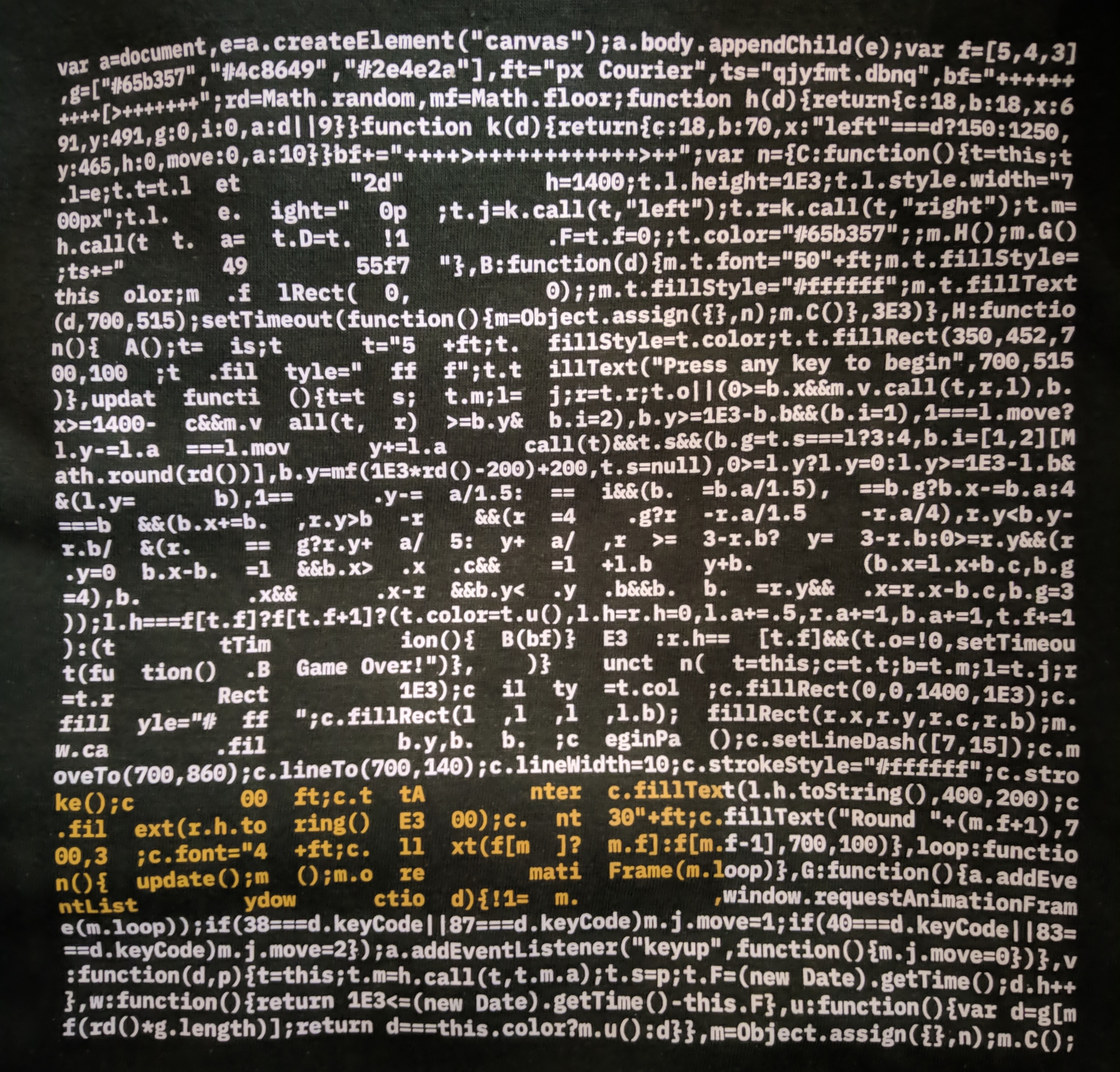 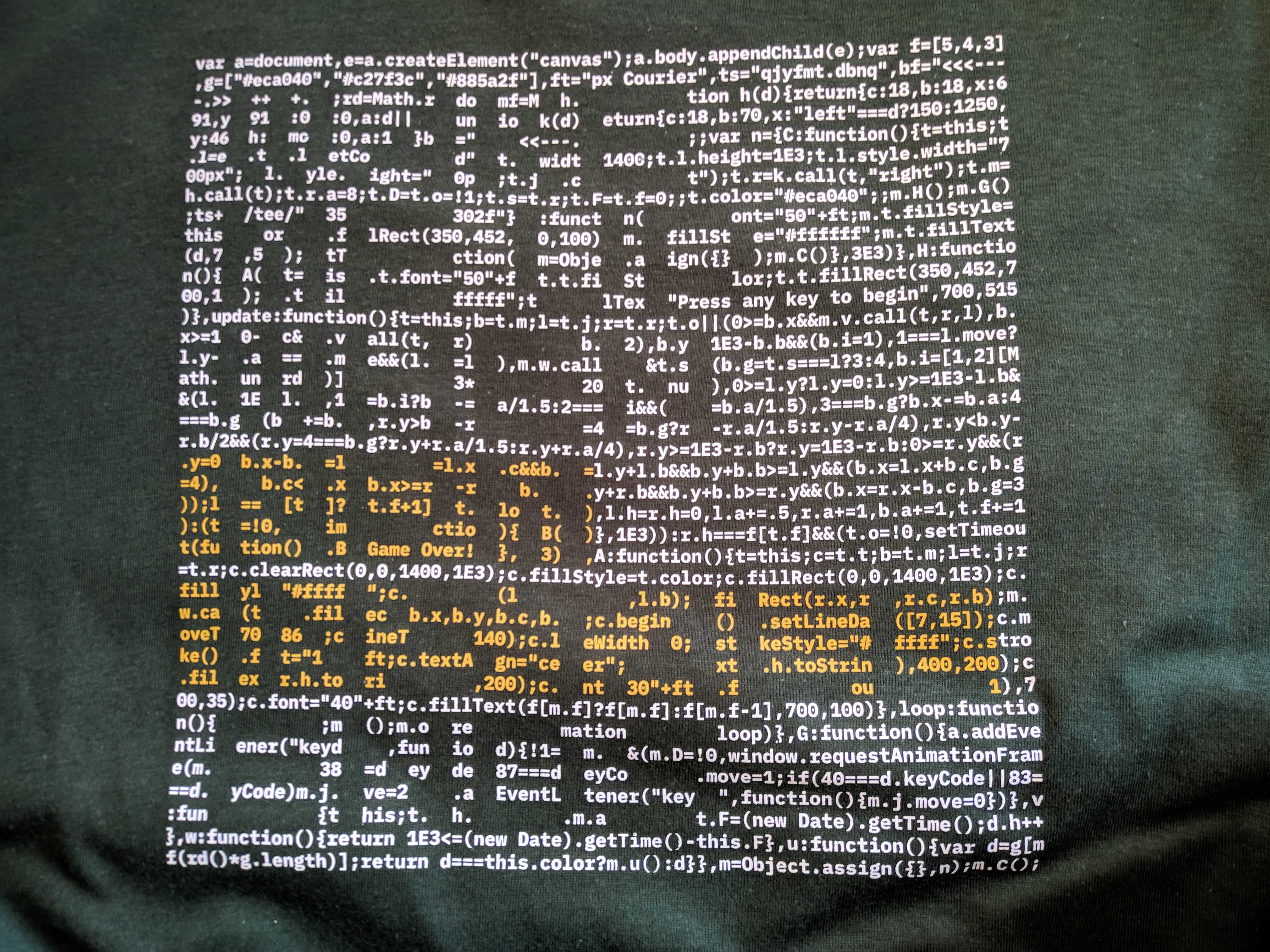 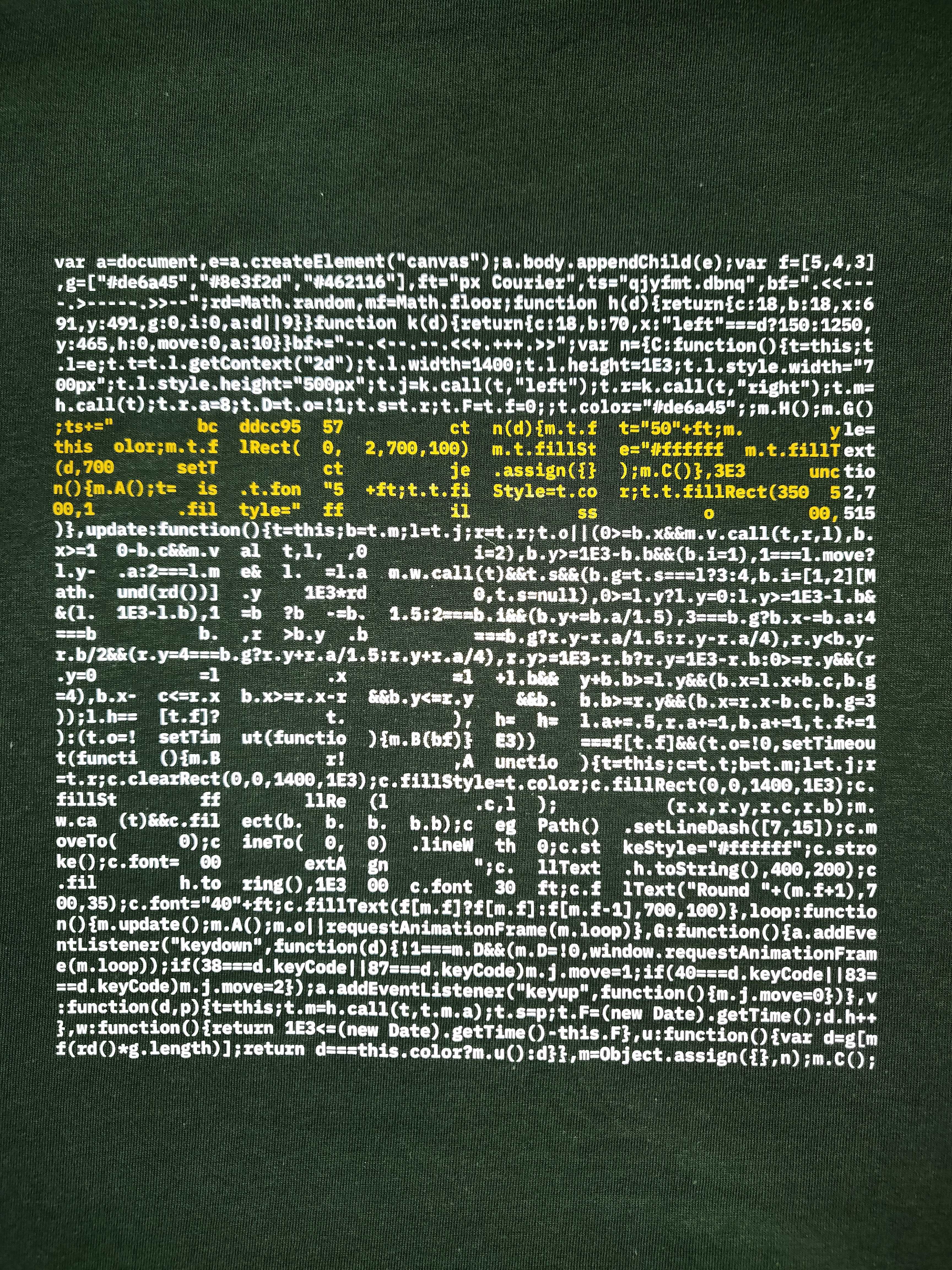 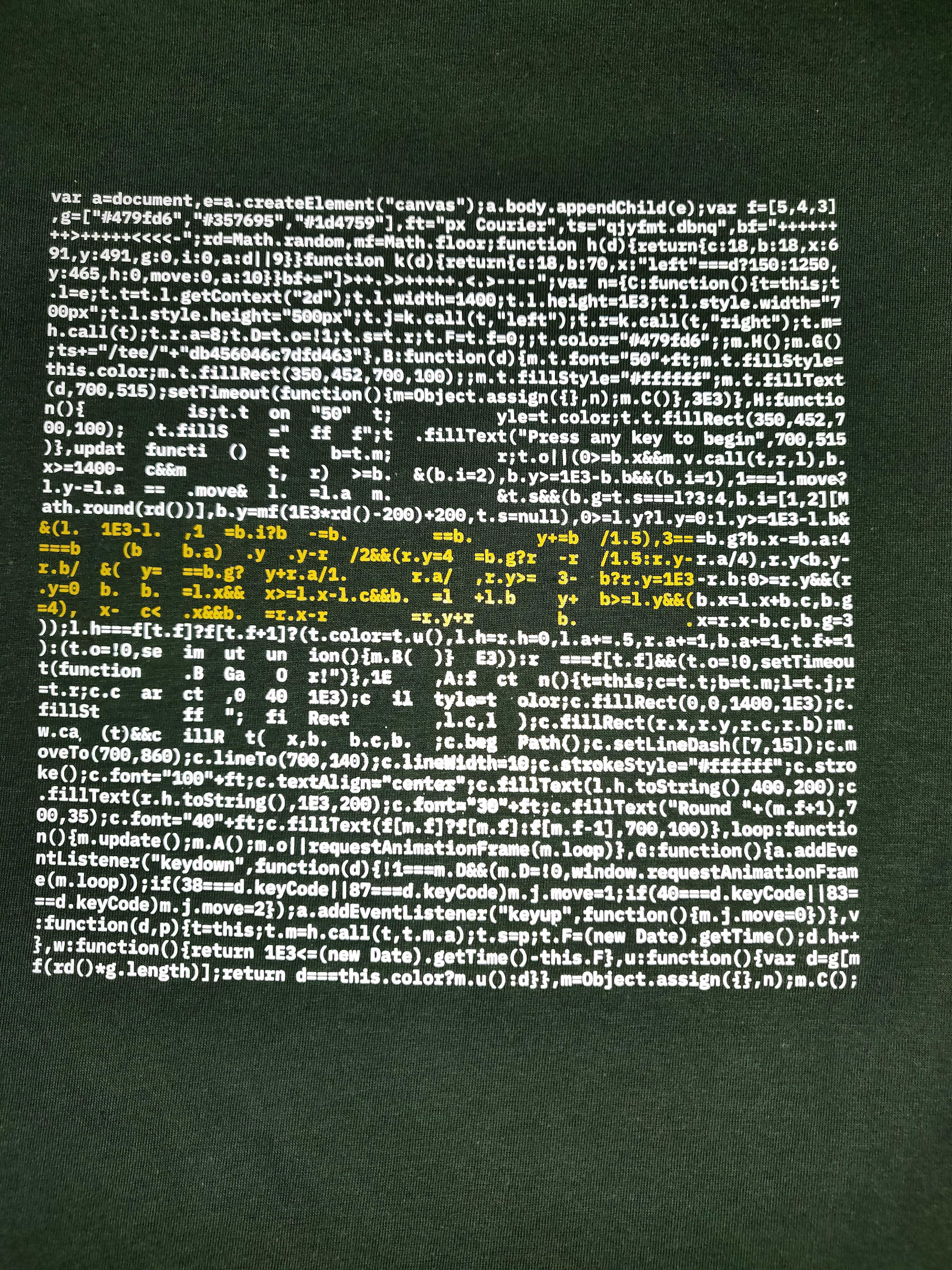 Finding out the t-shirts’ secrets and the spectrum part

By now, just looking at the content on the shirts, we had a pretty good idea of what we’d have to do. Inspecting a little closer, Tiago and I noticed that there was a piece of the code that looked strangely like brainfuck, but for some reason decided to find out what the code actually did. We asked Joana if she could blend two of them into a single image, to see if OCR actually worked. It didn’t, so Tiago started handtyping the first merged pair while I started working on a second one that wasn’t yet completelly merged.

While us three were working on this, rumors started to spread about a radio frequency (88.5 MHz) transmitting numbers and a ZX Spectrum that was waiting for a 5 digit number input (made by Celso, you can find his awesome write-up here). Having a slight suspicion that they would be connected, Francisco started looking into it, writting down two full number sequences and recording some of the stream. He found that that the first number of each sequence started with a 5 digit number, followed by 79 numbers with 3 digits. 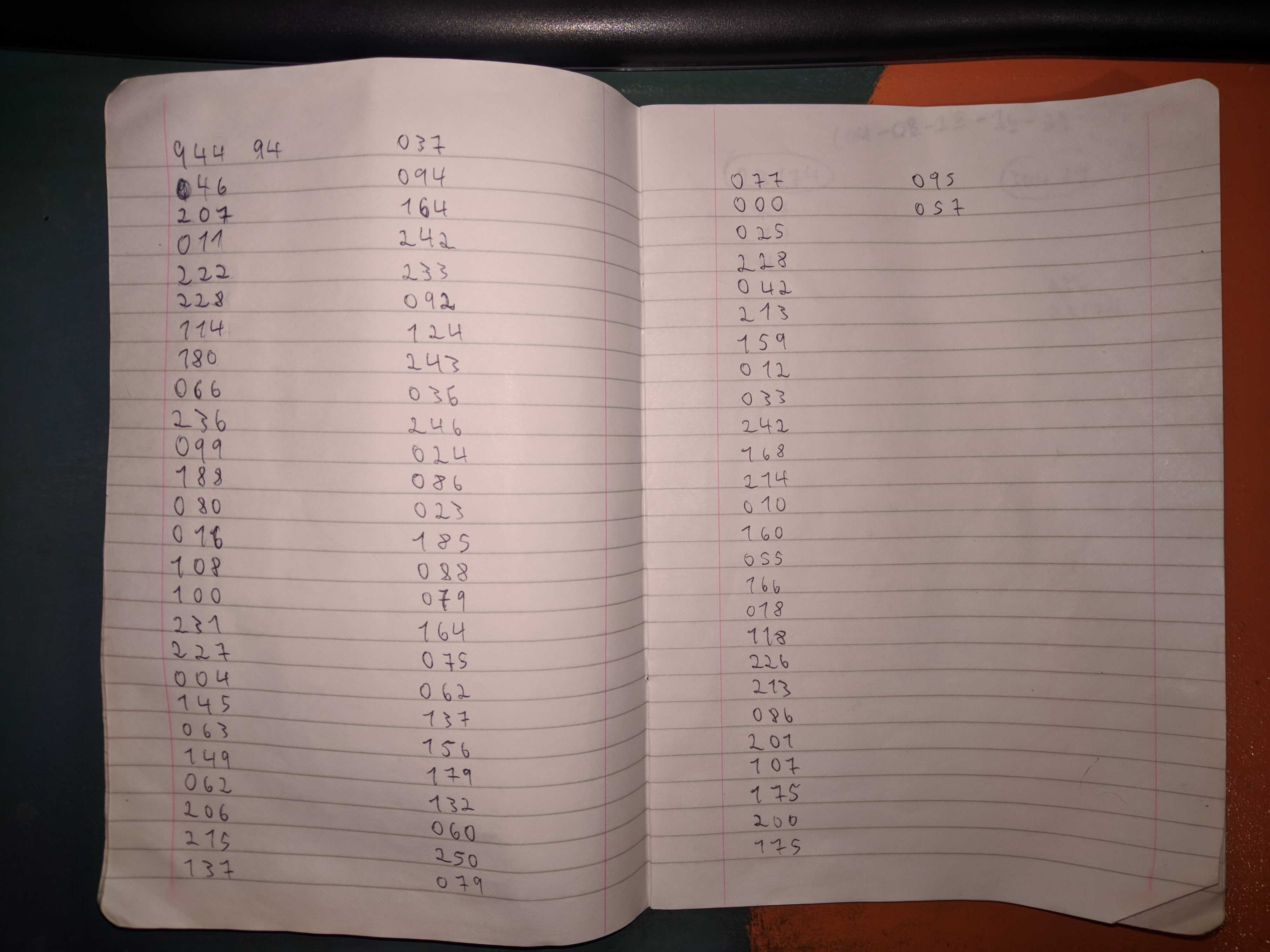 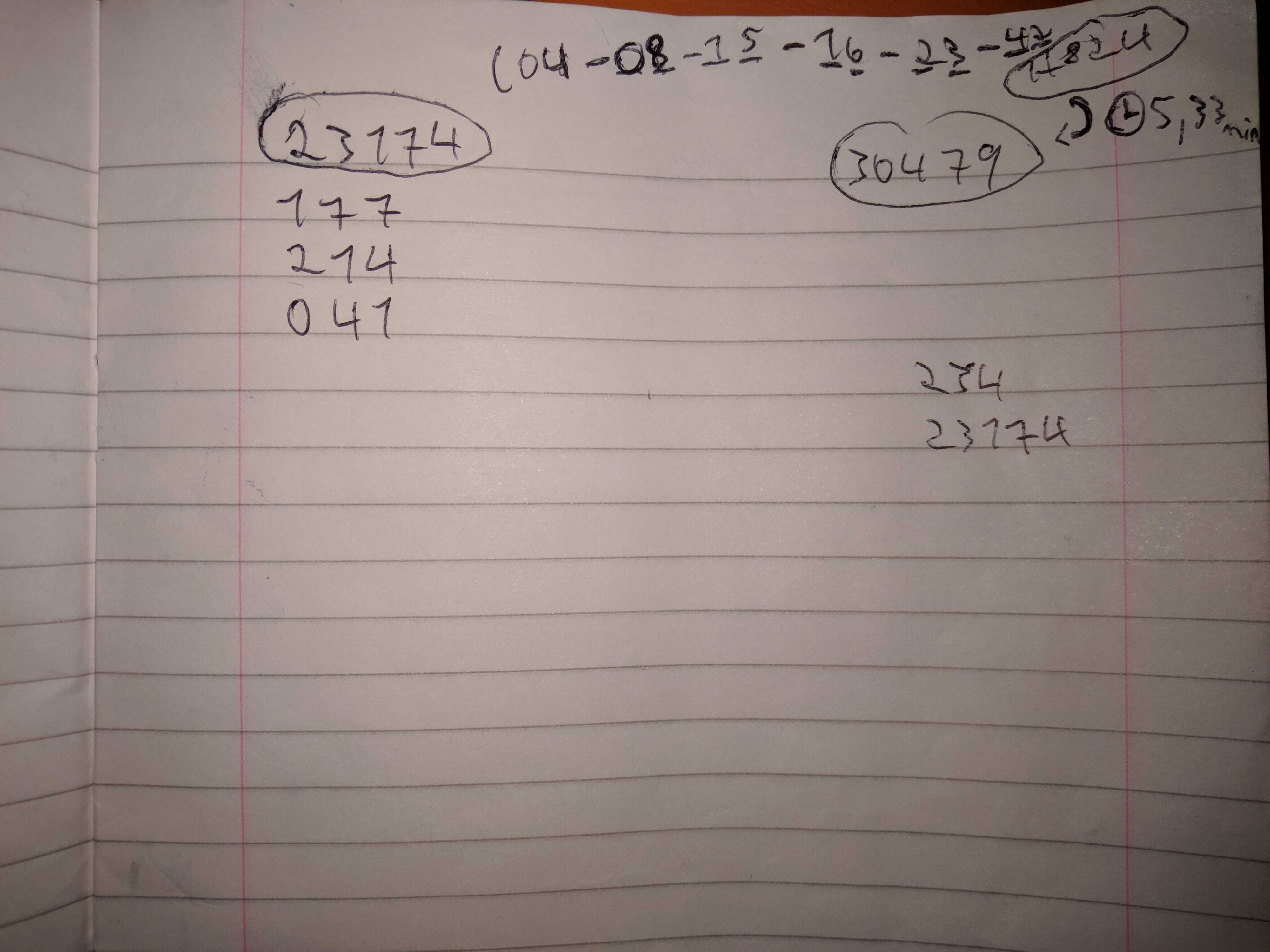 Given that the ZX Spectrum’s monitor had a modified Lost logo (that was designed by Isa as we later found out), Francisco tried one of the 5 digit numbers, followed by the number sequence from Lost (04,08,15,16,23,42). This actually worked and showed a screen with, again, more 3 digit numbers. 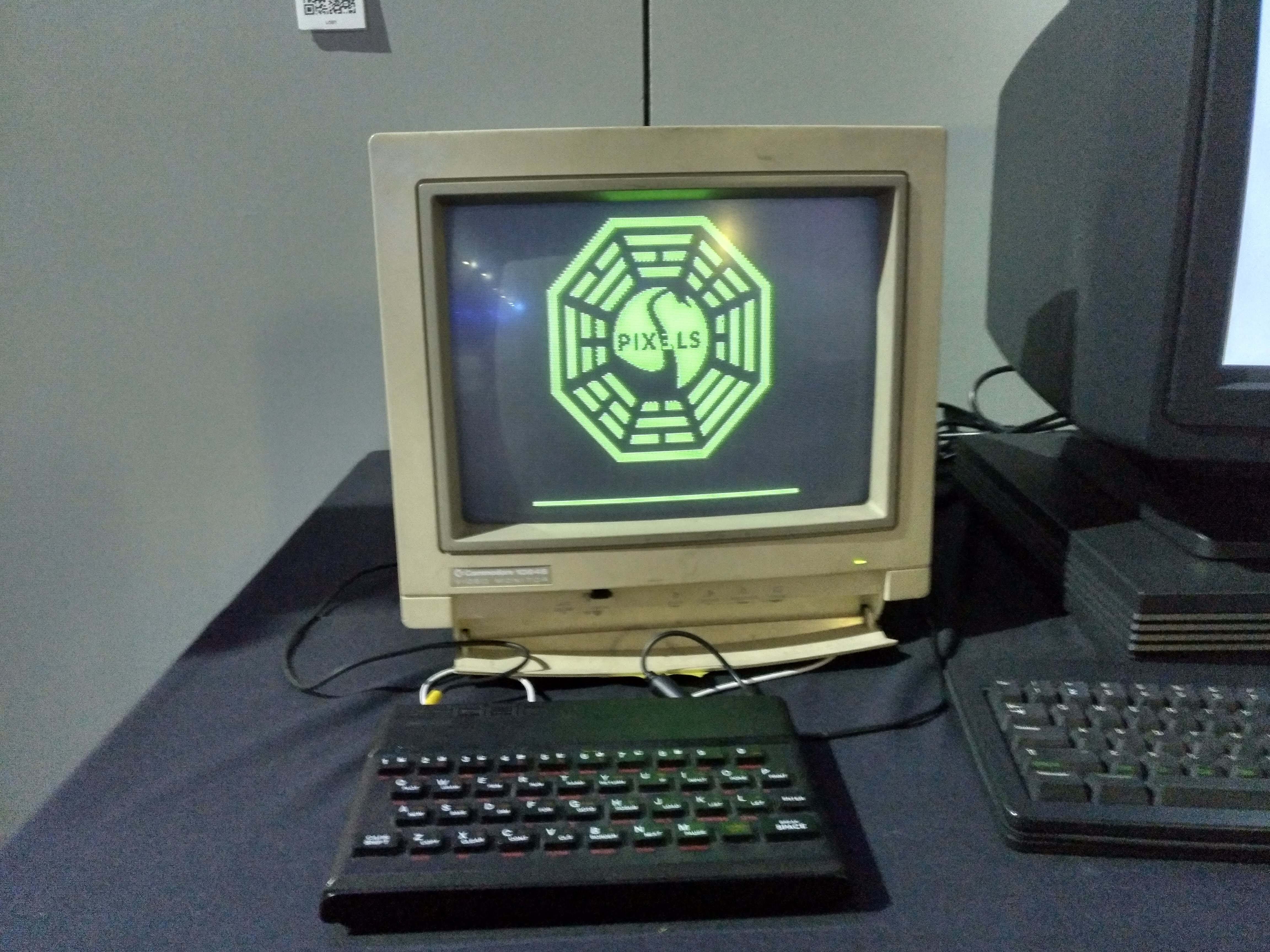 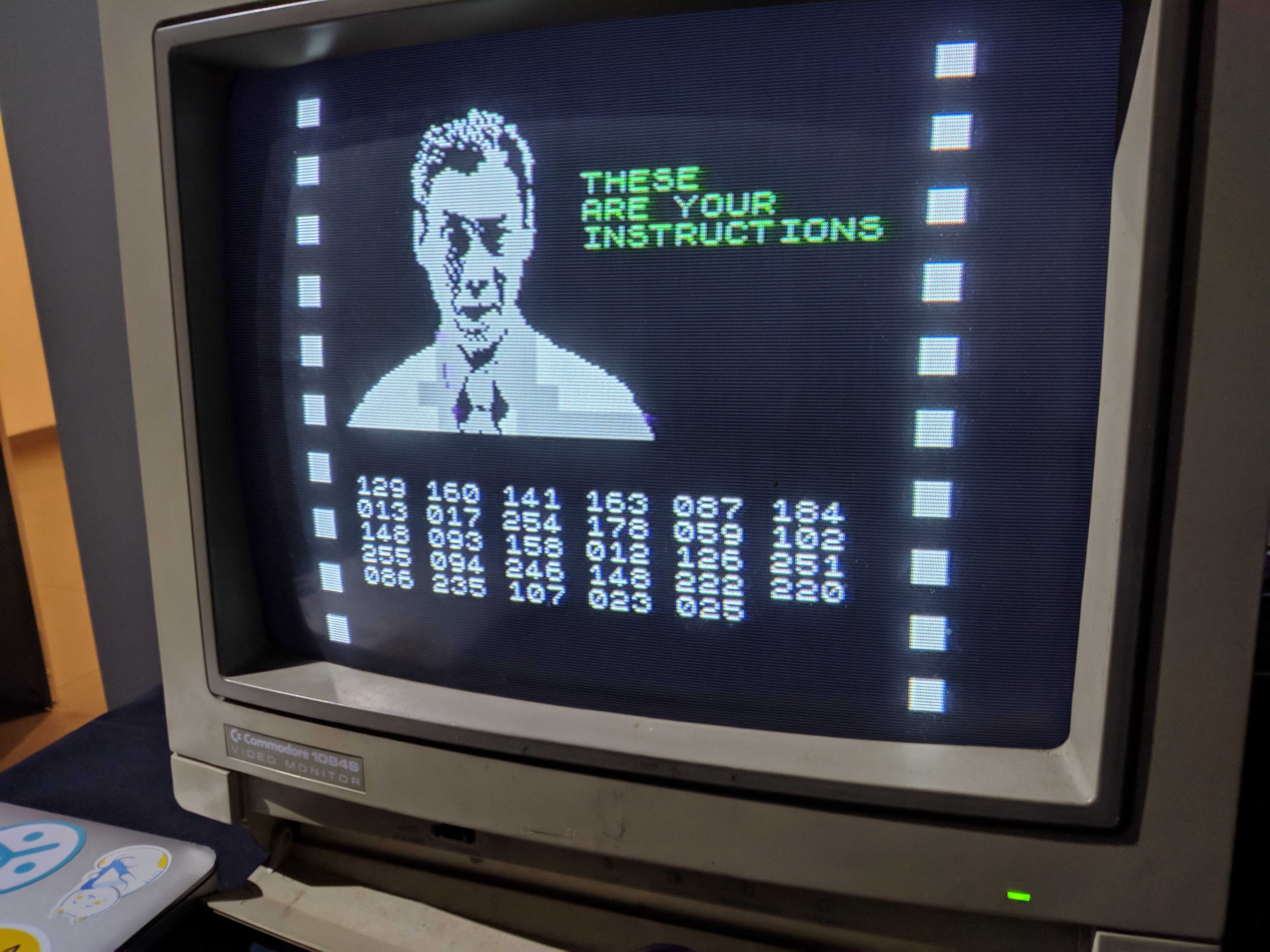 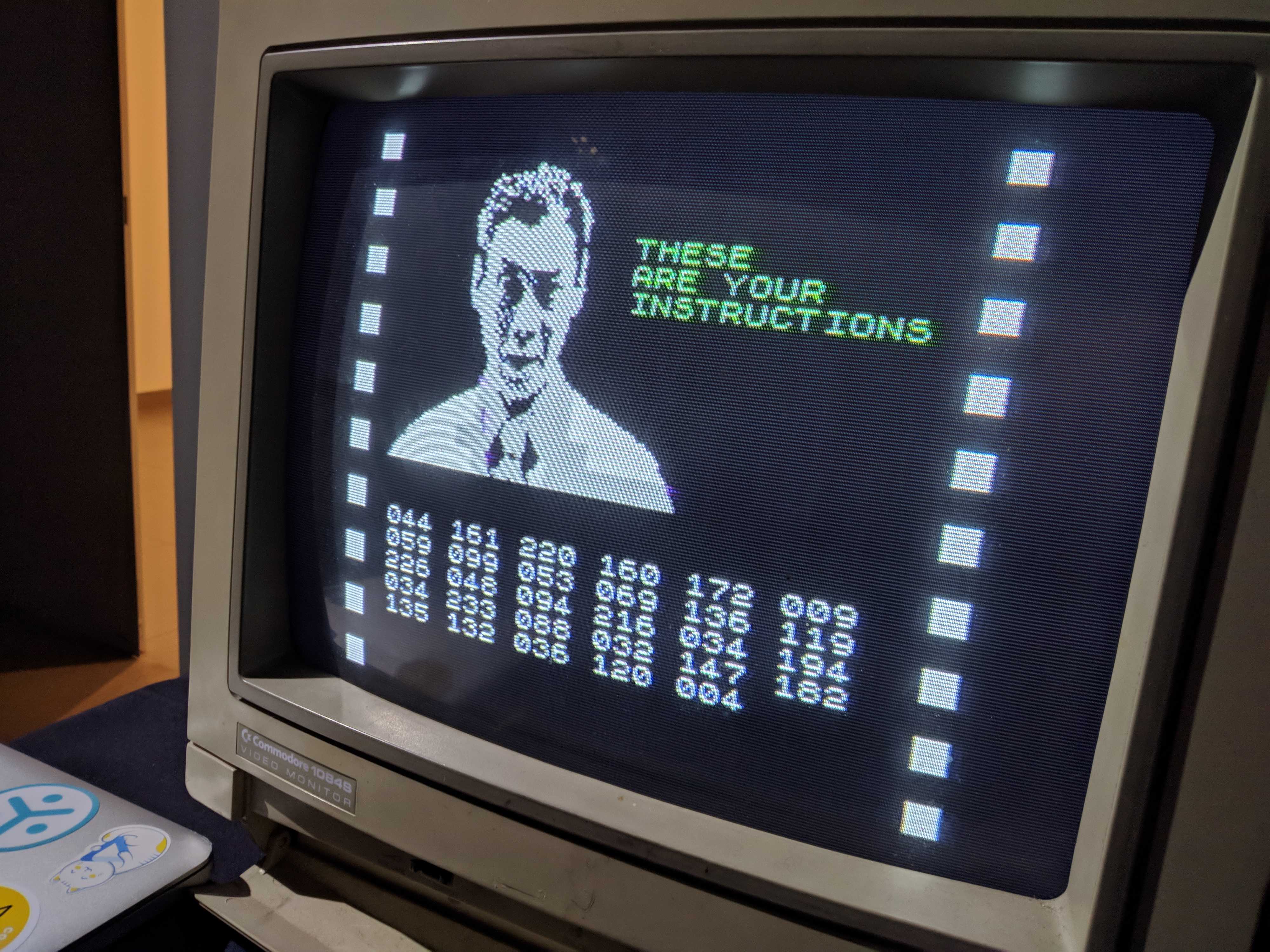 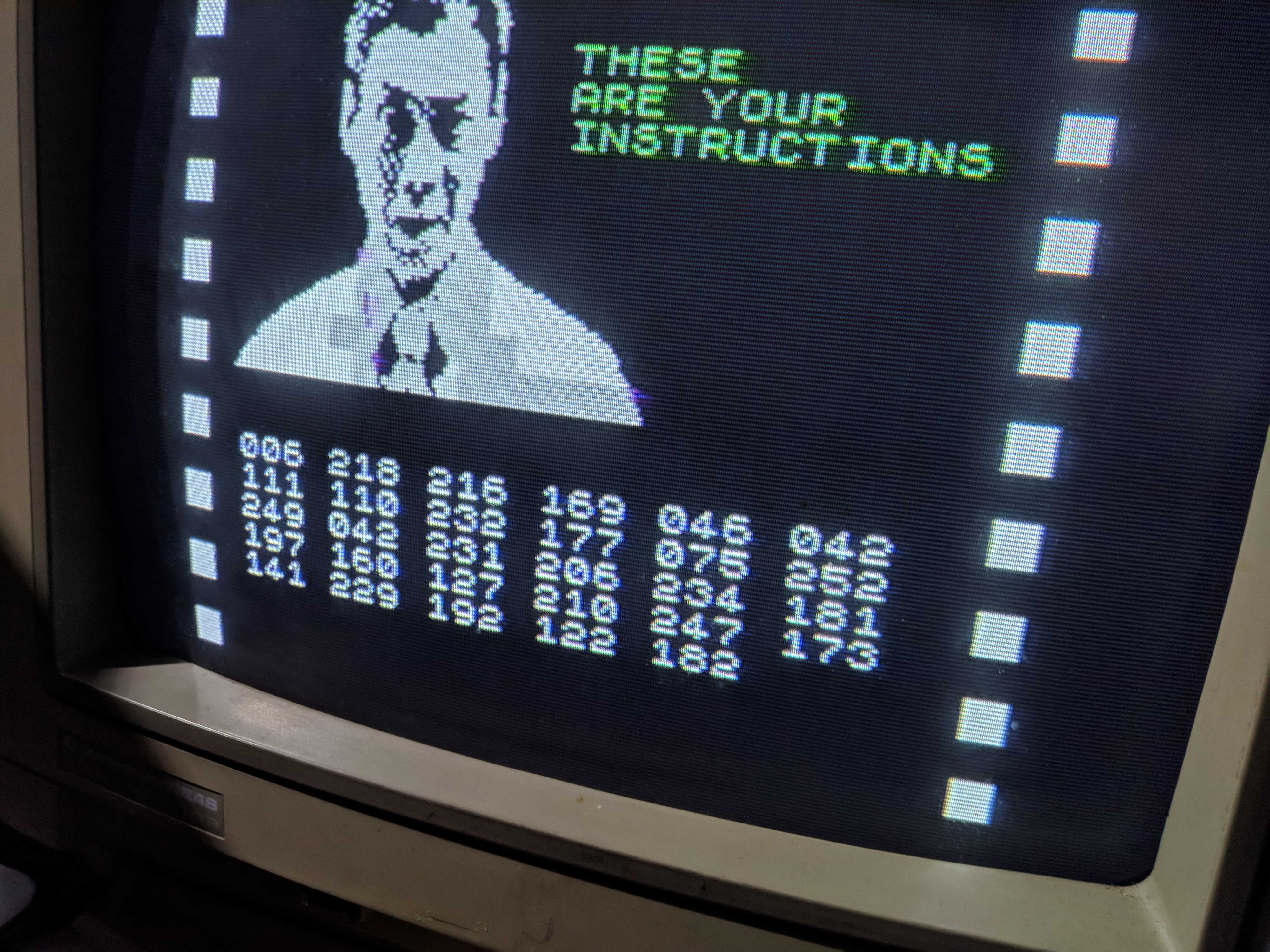 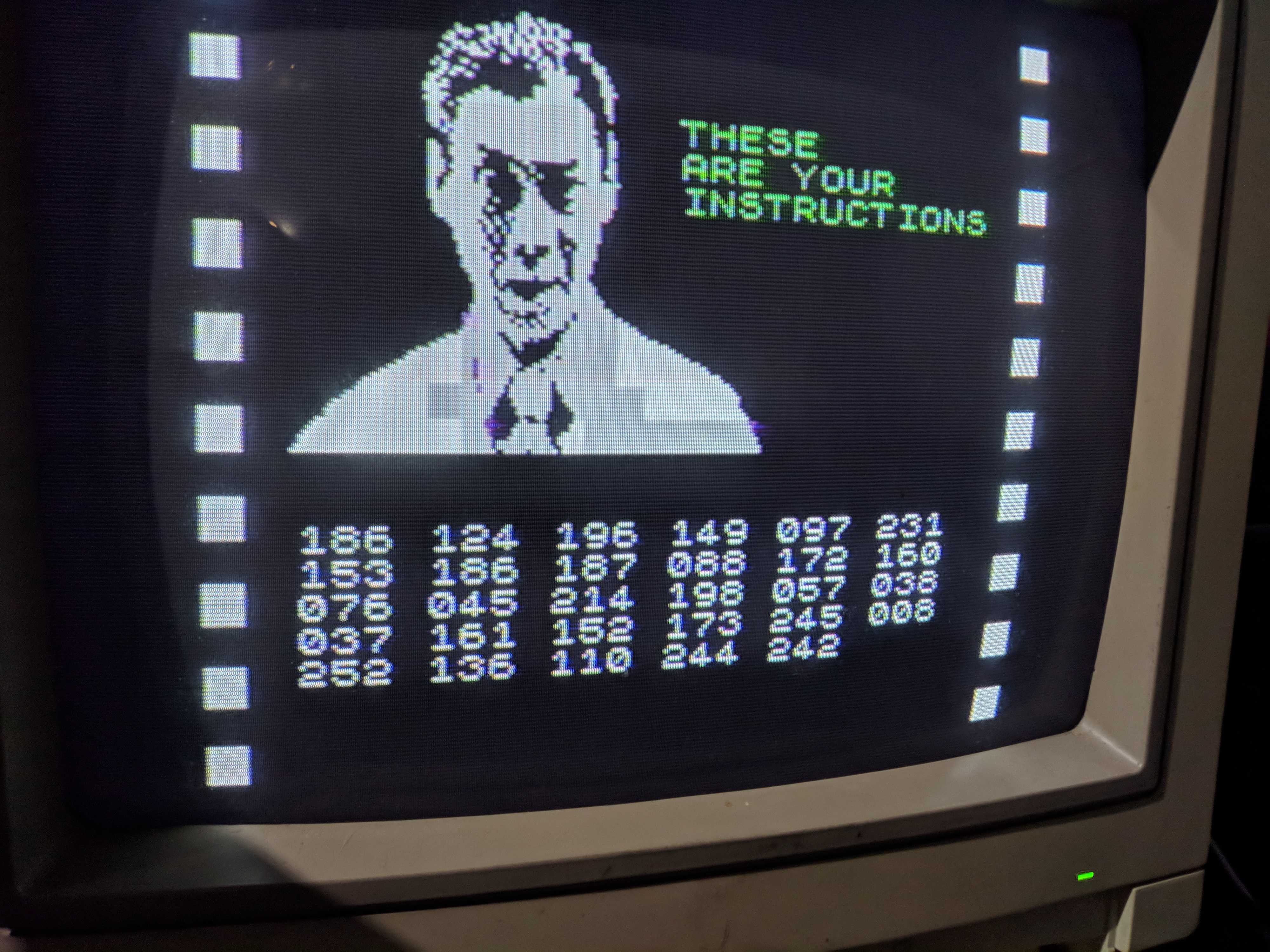 These 4 screens were kind of a dead end at this point. Converting the numbers to ascii didn’t return any meaningfull data, so we decided to go back to the shirts for more clues.

Tiago finished transcribing the code, there were some errors that we managed to find out quickly diffing his code against what was typed by me for the other pair of shirts, and we ended up with this:

Copying the code into the browser console gave us a game of pong. We assumed beating the game gave us a clue, so we tried it. Since we were all pretty tired winning was taking too much time, we didn’t want it to take that long so we changed the code a little to make the ball always travel right, making the game win itself for us.

When the game ended we were greeted with a string of brainfuck code. The same one we found when we looked at the shirts the first time. During the typing we also noticed that there was another string in the code, named ts, that had an hash appended to it. We plugged it into the pixels.camp URL and lo and behold, the same brainfuck.

Brainfuck on each shirt:

Finding that the bf var was all that was needed lightened our load significantly because we could discard transcribing all 10 shirts. We got all five brainfuck strings from the t-shirts and after a bit of trial-and-error we found the correct way to join them together:

The Agent ID also matches the 5 digit number from the Number Station. Now we knew for sure that the ZX Spectrum and Number Station were related to the T-Shirts, and we also had pretty good idea on what to do next.

Let’s recap all the data we have so far:

The next part was oddly and satisfyingly simple. I had refreshed my memory on number stations and one-time pads a couple of weeks earlier (thank you Quizmaster), so it seemed pretty clear that the site was the pre-shared key. So the next step should be XORing the message from the Number Station against the key. The result was:

Working on the first try, and telling us that we already have the data we need from the Spectrum. How nice!

We decoded the numbers from the Agent ID we got from the Spectrum with the remaining key and got a link to a pastebin that said:

In the maze, near the manhole…

So now we had to find a maze near a manhole. We went outside, thinking the Parque Eduardo VII’s bushes seemed kind of like a maze. Maybe we could find something near a manhole? The time was 2AM and there were 4 people walking around in the middle of what is a pretty shady park. After splitting up and covering almost all of it, we found nothing and headed back into the venue. We roamed around inside looking for something similar to a manhole for about an hour and nothing. Seemed like a dead end. Checking Slack to see if someone had finished the challenge we noticed Isa was awake distributing Night Owl and Movie Night badges, so I talked to her. We told her that we followed all the steps, got to the pastebin, and that we even done something dumb and went to the middle of the park to find something. She laughed and said we were on the right track from the start, and we soon got a message from cdeath who said, and I quote:

We went straight into google maps (let’s pretend we did this on a phone from the beginning), and started looking for manholes and things that looked like manholes. After marking a couple of them we went out into the park again, and while we were walking toward one of the marked spots, I get a message from Nuno asking if we’re done already. I share what we’re doing and show where we’re intending to go and he asks us if we know what a manhole is. At this point we’re feeling dumb, and Nuno says what cracks it for us. Zoom, enhance.

There it was. The X that marked the spot. We zoomed there pretty quick, found the manhole. And looked in the bushes for anything at all. It took us pretty long to find it, but there it was. 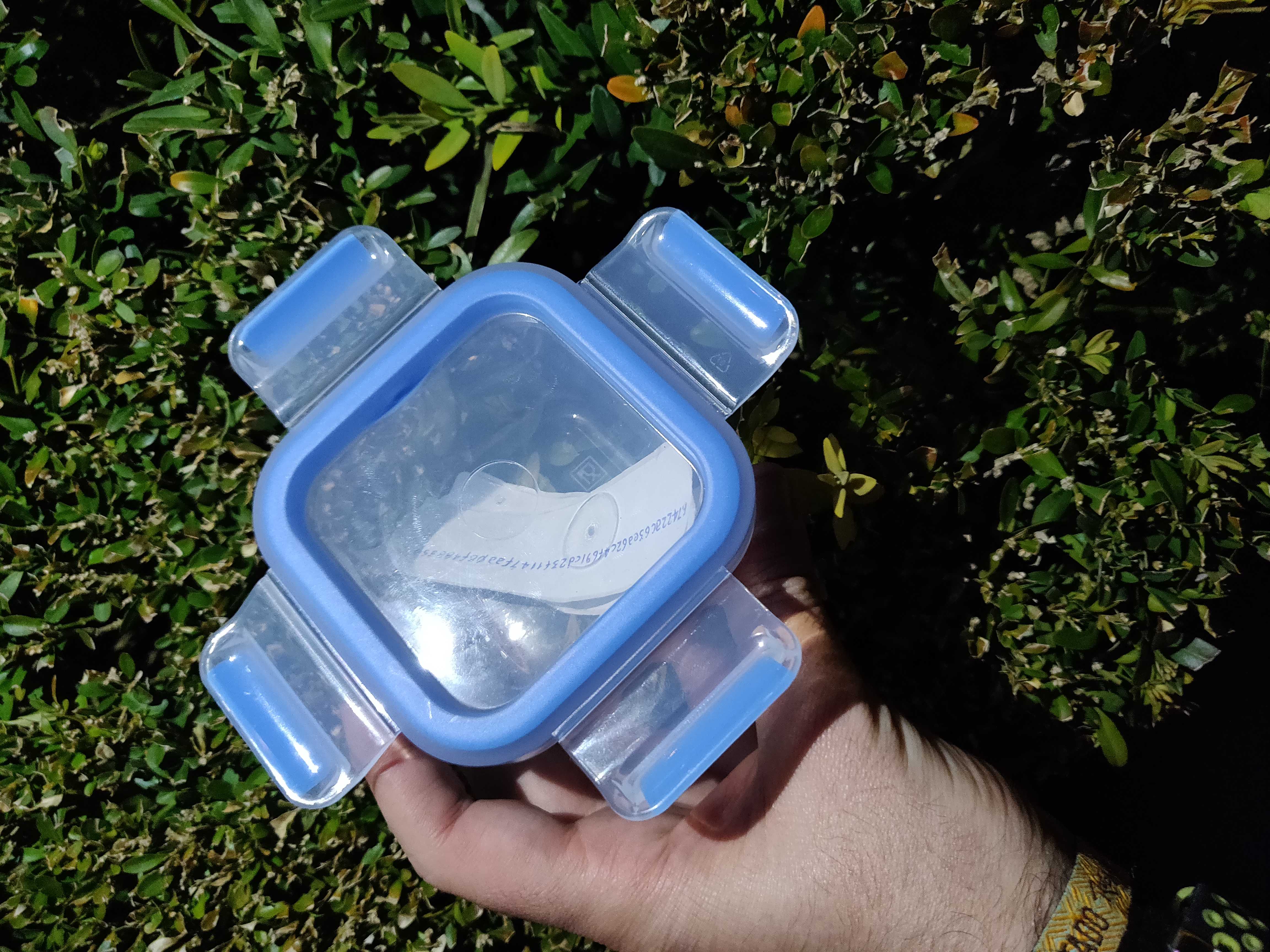 Me and Tiago each chose one and he got lucky! 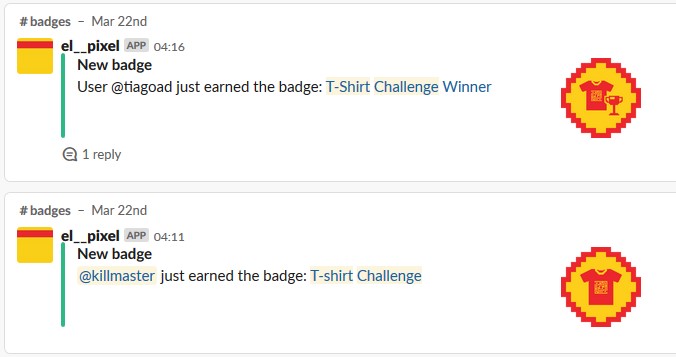 We would like to thank everyone involved on building this puzzle. You guys are awesome!

The full radio stream can be found here 10. Didn’t include it in the story because it wasn’t the one used by our team, but people might find it interesting.

10 Miguel Duarte - for the brainfuck code, the full radio stream, and the picture of the Lost Pix3ls